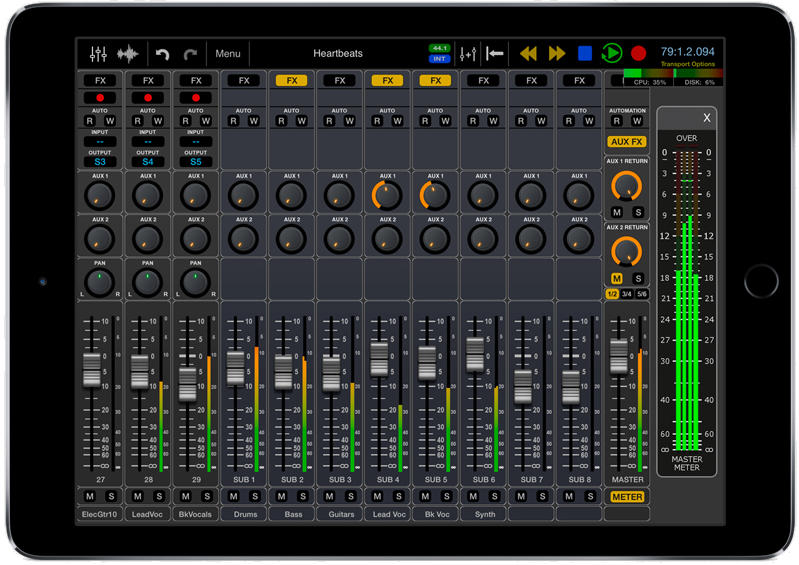 When Auria debuted, it astonished reviewers. "Brilliant, amazing and jaw dropping," said Music App Blog. "...anywhere but on an iPad it would sell for at least five times as much. It's really that good." said Recording Magazine. "We're stunned by what we see - and hear." said MacLife. "Simply put, there are no other apps available on the iPad that compete..." said Apps for Music Production. "Auria lives up to the hype. It is the real deal." said MusicRadar. Nominated for a TEC Award, Auria also won Editor's Choice from Electronic Musician. 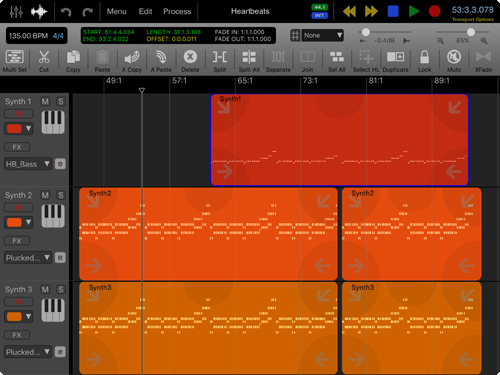 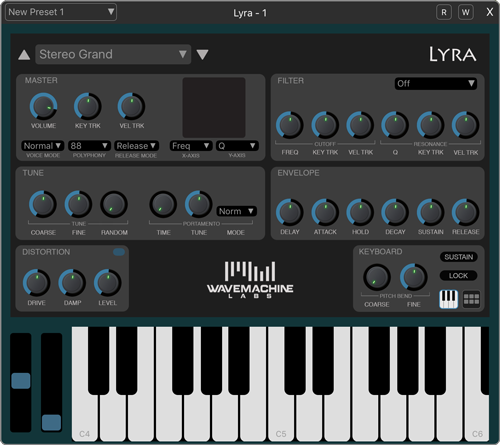 Lyra is a powerful sample playback system which supports SFZ, EXS and SF2 sample formats. Lyra is a true disk streaming sampler, so even large instruments like a 4GB piano will load with ease. Lyra supports all the SFZ opcodes, even obscure ones, and the EXS implementation is complete as well. 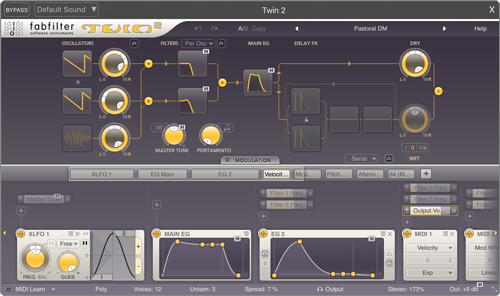 FabFilter Twin 2 is equipped with the best possible oscillators, award-winning filters and an innovative interface that makes sound design a breeze! Rather use presets? Twin 2 comes with tons of quality sounds that you can use right away.

With its innovative easy-to-use interface, programming Twin 2 is easy and fast. The what-you-use-is-what-you-see interface shows only what you are actually using, and the graphic component buttons give you direct access to the most important settings from the impressive list of features. 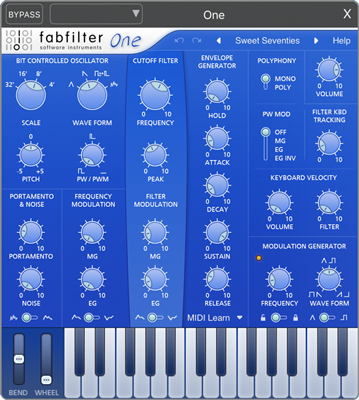 FabFilter One is a basic synthesizer with just one oscillator, but with perfectly fine-tuned controls and the best possible sound and filter quality. FabFilter has put tremendous effort in creating the best cut-off filter ever. Their new design approach has resulted in the fattest and smoothest self-oscillating digital filter you have ever heard. It has been tuned carefully to achieve the character and warmth of a classic analog synthesizer. FabFilter One’s filter sounds raw but never cheap or ‘digital’, even at full resonance.

The filter is fed by an equally high-quality solid-sounding oscillator, developed from scratch to be completely aliasing-free. It features sawtooth, triangle, and square wave forms with pulse width modulation.

The oscillator and the filter can be modulated by the LFO and the EG. The LFO offers triangle and square wave forms, with adjustable wave balance so any wave form between sawtooth and triangle can be selected. The EG has the usual ADSR knobs, but with a perfectly fine-tuned feel. Also, it has an additional Hold setting that extends the time keys are held down. 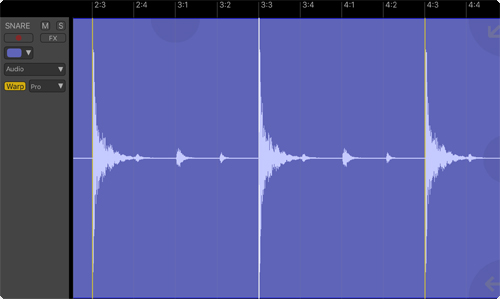 Included with Auria Pro is a real-time audio warping engine using élastique Pro v3, and utilizes transient detection to create warp markers that can easily be moved in time to change the rhythmic feel of audio recordings.

Automatically quantize audio using either warping or transient slicing, or extract the feel of an audio part and apply it to either audio or MIDI tracks by combining all of the above with groove quantizing! And Auria Pro's Audio to MIDI conversion turns audio drum parts directly into MIDI tracks. 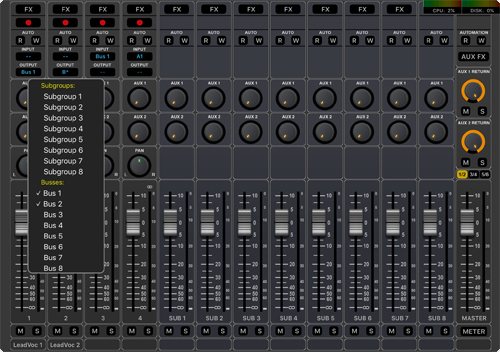 Make the jump to virtually unlimited tracks with Auria Pro. Combine that with six total Aux Sends instead of the previous two. And Auria Pro also adds an entirely new bus system, where up to 32 separate buses can be created and flexibly routed between tracks, auxes, and subgroups. 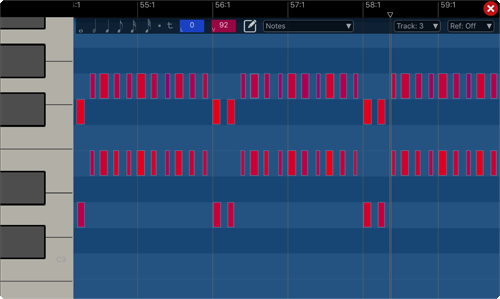 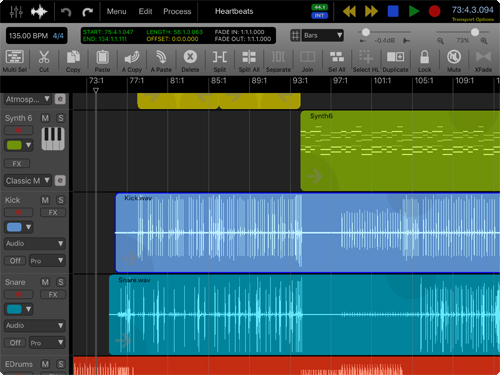 Auria Pro supports up to 24-input recording with compatible audio interfaces. Recording is as simple as choosing an input and pressing record. Auria lets you set input levels and choose to monitor tracks with or without effects. Auria’s powerful touch-based editor enables complete control over your music, with functions like Cut, Copy, Paste, Duplicate, Split, Join and more. Bring in audio from other apps. Or sessions from Pro Tools, Nuendo, Logic, Digital Performer or other DAWs via AAF import. Optional plugins like Drumagog even lets you fine-tune your drum tracks. 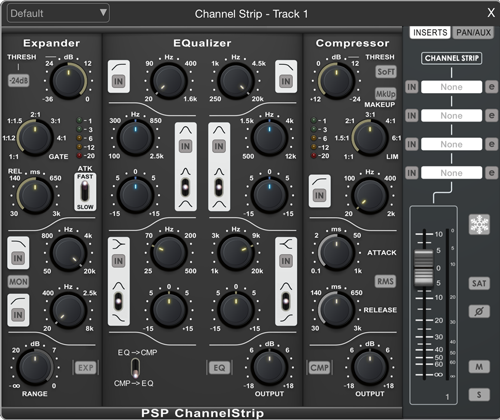 On top of that are eight subgroups and flexible buses, each of which can also accept four plug-ins. With full automation for both channel controls and plug-ins, Auria’s 64-bit mixing power is unsurpassed on the iPad. 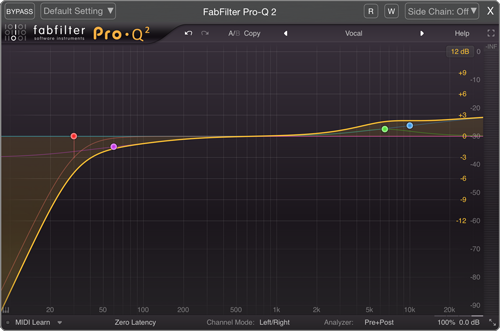 Optional plug-ins include PSPaudioware's Echo and Micro Warmer, the full suite of FabFilter effects like Pro-Q2, Pro-C2, Pro-L and Pro-MB, Overloud's THM plugin, FXpansion's DCAM effects, and more. And because WaveMachine Labs is helping plugin manufacturers port their existing plugins to the iOS platform, more plugins will be available through In-App purchase. 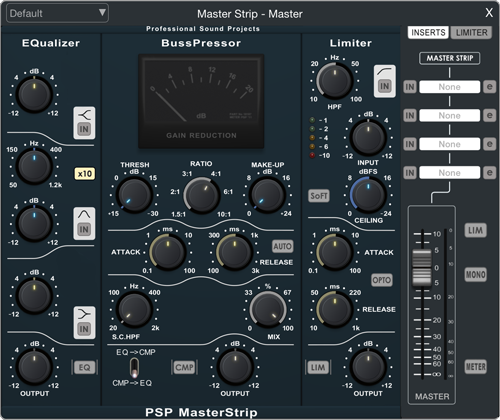 And because it all goes through Auria’s 64-bit Double-Precision summing engine, there’s plenty of headroom to prevent clipping.

Output as an .m4a or .wav file, use Audio Copy/Paste, or output directly to iTunes, Soundcloud, or Dropbox. Or export an AAF session which you can bring into Pro Tools, Nuendo, Logic, Digital Performer or other DAWs.

From the first input to the final mixdown, Auria’s stunning sound-sculpting tools and pristine audio reproduction will transform your iPad into an audio wonderland you simply won’t want to do without. 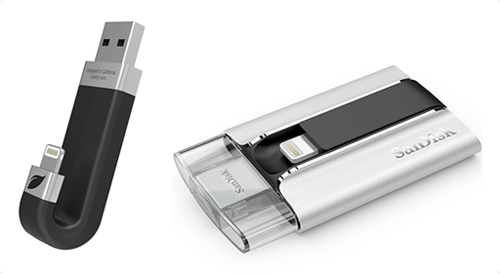 Auria Pro introduces support for iOS-compatible external hard drives. Using Auria Pro's new Save Project to other App feature allows you to backup and restore your Auria projects to external media with just a few taps.

Comparison of Auria and Auria Pro

Owners of Auria and Auria LE can upgrade to Auria Pro through the in-app store.

* All Trademarks recognized as property of their respective owners